Thank you for joining us again here at Hobby Car Corvettes, located in Martinsburg PA, as we continue the exciting series, C3 Vette Rundown. For each post in this informative and enlightening series, we will discuss the highs and the lows of each third generation Corvette. No matter your business, no matter your product, there will be ups and downs. For Corvette, personally, we feel there were more ups. The 1976 Corvette without a doubt, was an up year for Corvette.

We began this series with the launch of the third generation Corvettes in 1968, and today, we will discuss C3 Corvettes’ ninth year in the making. Wasting no more time, let’s find out how 1976 Corvettes reached new heights.

FIRST YEAR WITHOUT THE CONVERTIBLE

One of the main reasons for 1976 being such a successful year for Corvettes, could be the welcomed end of economic hardships. As we discussed for the 1975 Corvette, the oil crisis had brought hard times upon drivers and vehicle manufacturers alike. Gasoline prices skyrocketed and people began to think more about practicality, and less about speed and power.

Despite the hard times… Corvettes continued to flourish.

One of the biggest and most notable changes for the 1976 Corvette, was the removal of a convertible option. We similarly discussed in 1975, that the number of convertibles ordered had accounted for so few sales, that Chevrolet decided to do away with the option altogether. This had also been in response to rumors of new laws prohibiting fully open top vehicles. While the law never saw implementation, Chevrolet moved forward with the planned elimination nonetheless. Chevrolet executed sound judgment when making this wise business decision. The coupe was doing great, as evidenced by popularity. The convertible was falling short. So why spend time perfecting the lesser popular of two options, when you can simply take the more successful and aim higher? So that is exactly what Chevrolet did in 1976. They focused their work on perfecting the best seller!

It is popular opinion, that the 1976 Corvette Stingray was the best looking Corvette to date up to this point. Though there were few changes made, their impact was great. This, is true design talent.

First, The air-extractor vents were removed from the rear deck, along with the astro-ventilation system. The cowl flap was also removed, as complaints had been heard that the assembly whistled loudly while driving, taking away from a positive Corvette driving experience. In its place was a new modified cowl induction, which improved both aesthetics and function. This is a perfect example of one of the many changes in Corvette history that gave them the reputation for innovative design addressing form and function simultaneously.

1976 also saw the welcomed reintroduction of aluminum wheels that had originally been introduced in 1973 Corvettes. The wheels were manufactured by Kelsey Hayes out of Mexico, and can be identified by source and build location etched on the inside of the wheel. This makes for a fun search for your Corvette! Nearly 15% of the 1976 Corvettes were ordered and produced with this option in place. Corvettes fitted with these wheels weighed 32 pounds lighter than those without. An addition that was not warmly welcomed by some Corvette enthusiasts was the Vega-GT four-spoke, “sport” steering wheel. This change was not received well because this steering wheel was also being installed in the Chevy Vega GT and other vehicles as well. This made the steering wheel not unique to Corvette design. You could say it was seen as lack of effort and a poor design choice. Enthusiasts believed Corvette was worthy of a wheel of its own!

The 1976 Corvette was also the last year for white striped tires as the majority of Corvette buyers were ordering white letters.

Several positive mechanical and engineering changes were made for the 1976 Corvette. Engineers added a partial steel subsection between the floor and the catalytic converter. The ultimate goal of this addition was to enhance the sturdiness of the Corvette, and also to act as an insulator between the catalytic converter and the vehicle cockpit. These steel panels weighed less than the previous fiberglass panels and also decreased interior noise levels.

Though the increase was slight, it is worth the mention the addition of the catalytic converter did increase the HP of the 1976 Corvette. No one was mad about that! 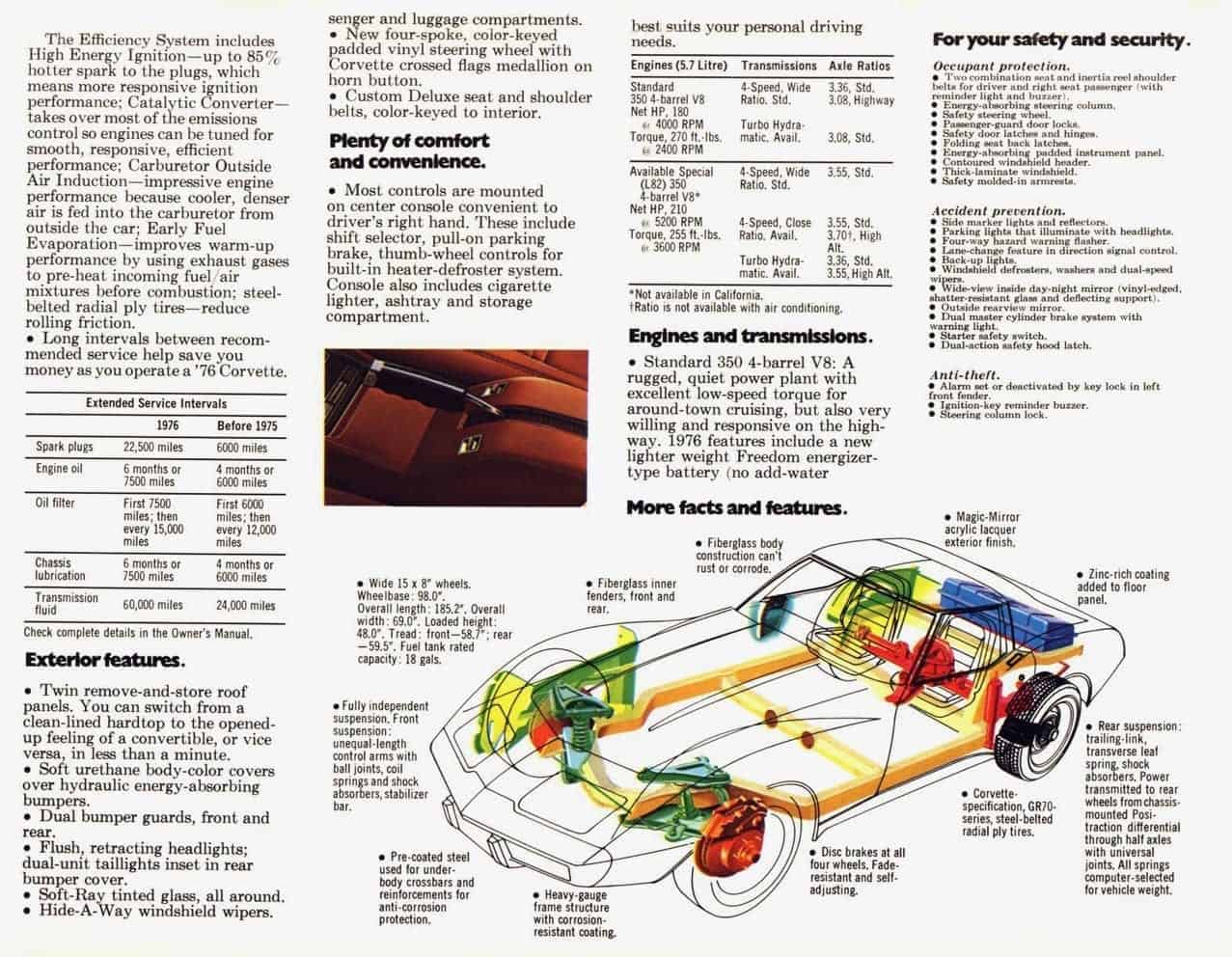 L48 engine saw a 15hp increase, resulting in 180hp for a 1976 Corvette fitted with this engine. The L82 boasted 210hp, and so was a popular option, but was not offered in California in 1976 or 1977 due to tougher emission regulations. California also would not allow four-speed manual transmissions for these years.

GM’s freedom battery was now installed in all cars. It was a sealed and maintenance-free unit. This battery was also lighter by 13 pounds. Halfway through production, power steering and power brakes became standard on all Corvettes.

Car and Driver magazine reported 6.8 second 0-60 times in both the L-48 and L-82 4-speed equipped 1976 Corvettes. Great press for Chevrolet Corvettes, the magazine ordered an L-48 4-speed for a 4,000 mile road trip to Alaska. Upon their return, Car and Driver reported the following:

“The Corvette was a big hit–we expected and thoroughly enjoyed that–but we were surprised at how well it withstood the ordeal…once we recovered from the trip we conceded that we’d developed new respect for a car we’d long regarded as something of a put on. In every sense of the word, our Yukon Corvette proved to be tough and we’d have to say that even the production versions impressed us as coming closer to being real touring cars than we might ever have thought. There’s a lot more sincere ring now to our stock answer to the question, Why a Corvette?”

Even without the convertible option, and additionally with a significant price increase, the 1976 C3 Corvette set new record sales this year! With a total of 46,558 Corvettes sold, 1976 was the highest selling year since 1969. That speaks volumes to the talents employed with Chevrolet Corvette, working tirelessly to maintain and exceed the highest standards.

We hope these posts have been helping you to broaden your Third Generation Corvette knowledge. No matter your goal in visiting us here at Hobby Car Corvettes, we hope to add value to your Corvette experience. We are happy to answer any questions you have about the cars we currently we have on our floor, and love connecting with Corvette enthusiasts all over the world.

If you are looking for a 1976 Corvette for sale, we have a wide variety of beautiful and powerful Corvettes for purchase, and we do sell nationwide and international. Please feel free to check out the 1976 Corvettes we currently have for sale, listed below.

We will see you again next week, for the rundown of the 1977 Corvette! We currently have the following 1976 corvettes for sale: