Thank you for joining us again here at Hobby Car Corvettes, located in Martinsburg PA, as we continue the series, C3 Vette Rundown. In each post of the series, we will highlight the changes and upgrades, or in some years, lack thereof, for each year of the third generation of Corvettes. We started six posts ago with the launch of the third generation in 1968, and today we bring you a thorough rundown of the seventh year in, the 1974 Chevrolet Corvette. Wasting no more time, let’s see what 1974 has in store!

FUEL RATIONS, END OF AN ERA 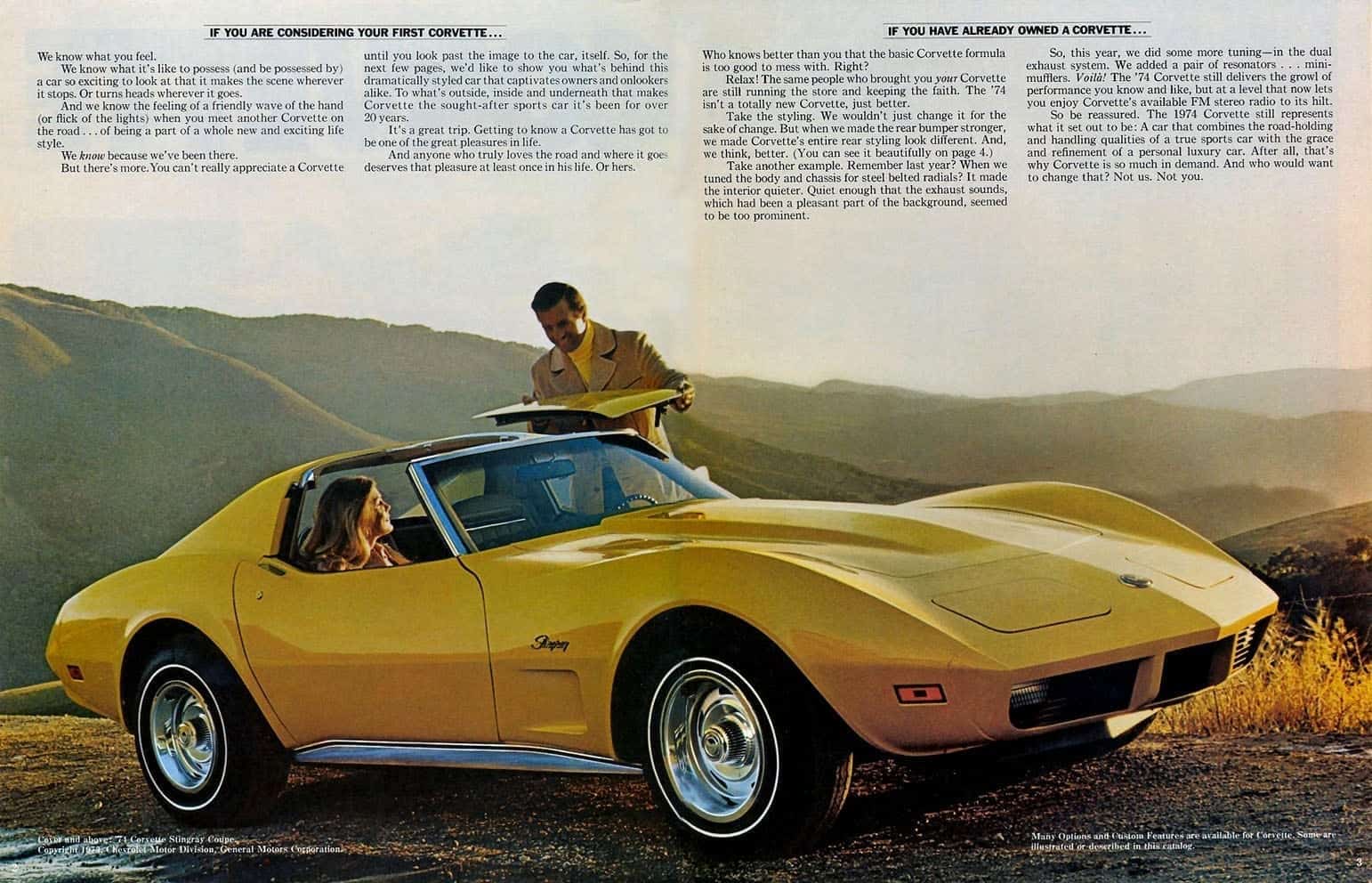 The release of the 1974 Chevrolet Corvette came around during hard times. As a result of international disputes, an oil embargo was placed against the United States. Though the embargo ended in March, and was not long lasting, the impact was. With a severely low supply of oil, gas prices soared and people found themselves waiting in long lines to fill their cars when more gas arrived. As a result, people began to question the necessity and impact of fuel guzzling vehicles. In response to these ponderings, the 1974 Corvette would be the last year to have the option of a big-block 454 cubic inch V-8 engine.

In addition, all Corvette engines of the future would solely run on unleaded gasoline. We will see more changes as a result of this event in the 1975 Corvette.

We had mentioned in the 1973 post, that the days of the dual chrome bumpers were gone. In 1973, Corvette introduced the front “rubber bumper”, which consisted of a steel frame covered with a urethane skin matching the Corvette’s exterior paint color. In 1974, this would be applied to the back bumper as well. The rear urethane skin was made of two sections divided by a seam down the center of the rear fascia. This is a notable design, unique to 1974 Corvettes, making them easy to pinpoint.

“Have you noticed how legends tend to improve with time?” On the inside, there were few changes made. Most notable, would be the change in seatbelt design. The 1974 Coupe now featured an integrated shoulder belt/lap belt combo. This of course is the design we are all familiar with today, and is federally mandated, but this was a notable change for vehicle drivers and passengers of yesteryear. The convertible models still offered the option of the separate shoulder belt and lap belt. Slightly more changes were made to the mechanics, than to the interior, but still not many. As a result of these changes, the standard RPO ZQ3 engine’s output increased slightly to 195 horsepower.

Because preference was growing for performance automatic transmissions, engineers took to enhancing the durability of the turbo hydra-matic. This transmission was a no-cost upgrade and installed in nearly two-thirds of the 1974 Corvettes. A brand new option for Corvette, first offered in 1974, was the Gymkhana Suspension Package. A bargain performance package, this option could be added for only $7.00! Included in the Gymkhana package was a higher-rate spring assembly and firmer, specially calibrated shocks.

This option was a variation of Chevy’s F41 option. This option included the above features, plus heavy-duty brakes.

The Corvette rear “seam” is a feature unique to the 1974 Corvette, and makes it easy to identify a Corvette from this year.

As the years race by, Corvette continues to impress, as an innovative influencer in the luxury sports car industry. Over the past six years, since the launch of the third generation, we have seen labor strikes, tighter regulations, and oil embargos. But the proud and inspired makers of Chevrolet Corvettes have not been discouraged. The one of a kind design continues to impress, and even more so, the power output never ceases to amaze us considering the obstacles Chevrolet has faced. Still in 1974, a Corvette equipped with the 250 brake horsepower L82 engine, could accelerate from 0 to 60 miles per hour in approximately 7.5 seconds.

Join us again next week, as we will be releasing our C3 Series posts weekly from here on out! If you have enjoyed our rundown so far, we have plenty more to come. As always, we are here at Hobby Car Corvettes, to share our knowledge and our passion with other Corvette lovers. Drop us a line and tell us your Corvette stories! We love to connect. 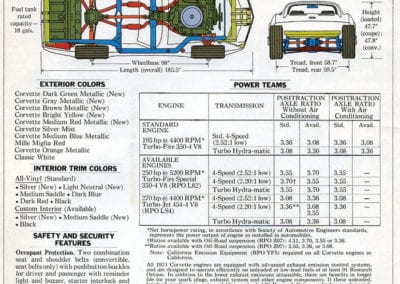 We currently have the following 1974 corvettes for sale: