For Vette lovers in search of that perfect vintage Vette, but particularly that beautiful blue Corvette they have always dreamed of… we have consolidated our inventory of antique blue Vettes onto this page below. If you don’t see the perfect Corvette you are looking for remember to call 814-937-4941. 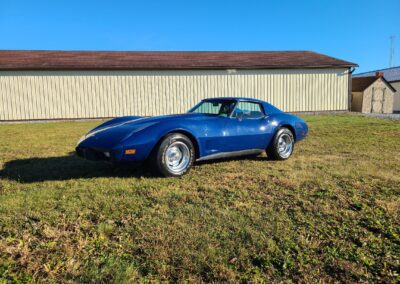 History of the Blue Vette

The 1963 Corvette began the new era of C2 Vette's, with a completely redesigned car with independent suspension, coupe body option, new engine options, along with a completely new interior, and body design. The 63 Corvette was released with two blues: code 916 Silver Blue and Daytona Blue they produced 3,475 Daytona Blues and an unknown number of Silver Blues. The 1964 C2 Vette Continued with code 912 Silver Blue and code 916 Daytona Blue. GM produced 3,121 Silver Blue Corvettes in 64 and 3,454 Daytona Blue Vettes. The 1965 Corvette was the first year for disc brakes on a Corvette. This year also only had code FF Nassau Blue with 6,022 produced. The 1966 C2 Corvette continued with the same body style as the 63, 64, and 65 with code 976 Nassau Blue and new code 978 Trophy Blue and code 980 Laguna Blue. They produced 6,100 Nassau Blue Corvettes, 2,054 Laguna Blue, and 1,463 Trophy Blue. The 1967 production year was the end of the C2 Mid Year Corvette with code 976 Marina Blue with 3,840 produced, code 977 Lynndale Blue with 1,381 produced, and code 980 Elkhart Blue with 1,096 produced. This was also the last year for a fixed roof coupe corvette, 1968 would bring a T Top setup to the coupe.

The 1968 C3 Corvette begins the longest run of one body style Corvette ever. This Corvette has a completely redesigned Mako Shark body, with a whole new look and feel. This Corvette has popup head lights, in place of 63 – 67 rolling head lights. This Vette also has popup wiper door to hide the wipers, something completely new for the Corvette. This year also featured removable T Tops for the coupe which is another item never seen before on a Corvette. In 68 they used code 976 Lemans Blue with 4,722 produced and code 978 International Blue 2,473. The 1969 C3 Corvette carried the same body and interior as the 68 with only a few minor changes like no push button locks, and different door panels. Chevrolet produced only code 976 LeMans Blue in 1969. The 1970 Corvette saw a few minor body changes including wide fender and quarters to stop debris damage to the paint, and new side vents, along with a larger displacement big block and an all-new small block LT1. In 70 they used two different shades of blue: Code 976 Mulsanne Blue and Code 979 Bridgehampton Blue. The 1971 Chevrolet Corvette was a continuation of the 1970 C3 Vette with code 976 Mulsanne Blue and code 979 Bridgehampton Blue produced. Chevrolet produced 2,465 Mulsanne Blue and 1,417 Bridgehampton Blue Vettes in 71. The 1972 Corvette was the last year for chrome bumpers on both ends of the Vette. Chevrolet produced 1,617 code 945 Bryar Blue Vettes in 72.

The 1973 Chevrolet Corvette was the first year without a front chrome bumper, the last year for chrome bumper on the rear, and without a popup wiper door, the hood was lengthened to cover the wiper area. GM produced 3 different blues in 1973 code 922 Medium Blue, code 927 Dark Blue, and code 945 Blue Green. The 1974 C3 Vette was the first year for rubber bumpers on both ends. The 74 Corvette only had code 922 Corvette Med Blue. The 1975 C3 Vette was the last year for a Corvette convertible in the C3 body style. Chevrolet produced code 22 Bright Blue and Code 27 Steel Blue with total production numbers at 2,869 for Bright Blue and 1,268 for Steel Blue. 1976 was the first year for the optional alloy wheels, this year also had the new sports steering wheel. Chevrolet used only code 22 Bright Blue with 3,268 produced. The 1977 Corvette was the last year for the short back window which was introduced in the 1968 Corvette. GM released two blues in the 77 production year: code 26 Corvette Light Blue and code 28 Corvette Dark Blue. Total production numbers for Corvette Light Blue are 5,967 and Corvette Dark Blue is 4,065.