How Corvette Emblems Have Changed Over the Years

Though the Corvette emblem is easily recognizable regardless of the year, the design has changed drastically over the past 50-plus years.

The first Corvettes were introduced with a round white emblem with the now famous crossed flags. The flag on the right is a black and white checkered racing flag. The flag on the left is red and featured the Chevy bowtie symbol and a symbol called a “fleur-de-lis.” Below the fleur-de-lis are three horizontal lines. The flags are in the middle of the circular emblem with the printed word “CHEVROLET” at the top and the word “corvette” in cursive at the bottom.

A little-known fact in Corvette history is that until just four days before the Corvette was introduced to the public, an American flag stood in place of the red flag on the left. This is how the Corvette logo was originally designed by Robert Bartholomew, but it had to be changed at the last minute because it is illegal to use the American flag on a commercial product. The American flag was replaced with a flag containing the Chevy bowtie symbol and the fleur-de-lis. The fleur-de-lis is a French symbol for peace and purity and literally means “flower of the lily.” Chevrolet originally wanted to use a family crest from the French ancestry of Louise Chevrolet, but could not find one in his past. They settled for the fleur-de-lis because of its French origin. Three horizontal lines were also placed just below the fleur-de-lis. The original logos were replaced with the newly-designed logos just before the corvette’s unveiling.

The emblem used on the 1953 Corvette stayed the same until 1956. The emblem remained a circle, but instead of being flat white, it was placed on glass above a silver metallic surface. A metallic V symbol (to commemorate the switch to a V8 engine in ’55) was placed on top of the crossed flags. The words at the top and bottom of the circle remained the same, except “corvette” was now printed in capital letters, instead of in cursive type. Another change in this year was that emblems were now featured on both the front and rear of the car, rather than just the front as in previous years.

In 1962 the front emblem was changed again. The V was removed and the flags were featured in front of a gold-metallic circular outline.

In 1963 both front and rear emblems were redesigned. The front emblem was formed by the two flags, together in a V-shape. In the middle of the V was a triangle with a red, a white, and a blue horizontal stripe. The rear emblem was now placed on the the gas lid, a trend that would last until the introduction of the C5 in 1997. When this started, the whole gas lid formed the emblem, which was a large circle matching the color of the car, with a simple picture of the crossed flags inside.

In 1964 the front emblem remained the same, while the fuel door emblem no longer matched the color of the car. The same flags were featured inside of a smaller metallic circle, which was inside a larger metallic circle with a ripple-like circle pattern. In 1965 the fuel door emblem featured the same crossed flags, this time inside a small white circle inside of larger black and silver metallic decorative circles. Also in 1965, the front emblem was changed to a simple figure of the crossed flags.

In 1966 the front emblem stayed the same, while the fuel door was changed back to a design similar to that of 1964, but with lines in the outer circle reaching outward, where ripple-like circles had been before. In 1967 flags on the front emblem were modified slightly, changing from a simple crossed flags design, to a flatter, more horizontal design. These newly-designed flags would remain the same through 1972. Also in this year, the fuel door was no longer taken up entirely by the rear emblem. The emblem, which consisted of the same flags as on the front emblem, was still a fixed part of the fuel door. In 1968 the fuel door would appear the same, but the emblem would become a bolt-on piece to the fuel door, rather than a fixed piece. This design for gas lid emblems would remain the same through 1973.

In 1973 the front emblem was replaced with a circle emblem. This featured the crossed flags on top of a red starburst design. Around the edge were the words “CHEVROLET MOTOR DIVISTION CORVETTE” in silver letters on a black surface. This emblem was also used in 1974. 1974 featured no rear emblem. The front emblem used for 1975 was similar to its predecessor, but the words were removed from the edge, allowing for the flags and starburst design to be larger. The word “COVETTE” was added in silver under the flags. The same emblem was used on the gas lid. The front and rear emblems remained the same in 1976.

In 1977, both front and rear emblems were replaced once again with the simple crossed flags. The design was once again slightly different- the flags were longer and for the first time only one horizontal line was shown under the fleur-de-lis, rather than three. To date no emblems have brought the three lines back.

1978 commemorated the 25th anniversary of the corvette, so for that year of the Silver Anniversary, the same flags as in 1977 were used, but this time on top of a decorative metallic circle. This circle features a starburst-type design behind the flags. Centered above the flags is a “25.” Around the edge is the word “CORVETTE” at the top and “1953 ANNIVERSARY 1978” at the bottom. This design was used for both front and back emblems. 1979 was back to the same flags that were used in 1977 for front and rear.

1980 saw another redesign of both front and rear emblems. Flags were still used for both, but they were made even longer and thinner than before. The front emblem formed a slight V shape with a black outline, while the rear emblem was nearly horizontal across the top and had a chrome outline. The front emblem stayed the same in 1981, while the rear emblem got a black outline and darker appearance.

1982 was the last year for the C3 body style and had emblems unique to that year. These emblems consisted of the crossed flags, but were drastically changed from the previous year. These flags were once again shorter and taller and were very simple. For the first time, the fleur-de-lis was removed from the red flag, which only featured the Chevy bowtie symbol. Emblems were the same on both front and rear, except for on the 6,759 Collector Edition Corvettes that were produced to commemorate the last year of the C3. These cars had the same rear emblem and on the front emblem were the same flags surrounded by a black circle outline. On the top of the circle read “CORVETTE” and on the bottom “COLLECTOR EDITION” in yellow letters.

With the introduction of the C4 body style came another redesign of the emblem. The flags were still featured, but without the poles that had always appeared before. The flags were once again long and thin, but were no longer rippled as if blowing in the wind. Most interesting was that the red and checkered flags were reversed, putting the red on the right and checkered on the left for the first time ever. Once again, the bowtie was all that appeared on the red flag. These flags were formed in a very slight V shape and surrounded by a black circular outline. These remained the same until 1991.

In 1991 the emblem basically remained the same, but the red flag with silver bowtie was replaced by a black flag with a red bowtie outline. These stayed the same for both front and rear through 1996. The only exceptions were 40th Anniversary Corvettes, Pace Car Corvettes, and Grand Sport Corvettes, which featured the same emblems, but with a silver outline where black would be otherwise, and also 1996 Collector Edition Corvettes.Front emblems for Collector Edition Vettes in 1996 were very similar, but formed a straight line rather than a V shape and also featured a silver rather than black outline. The right flag was black with the words “COLLECTOR EDITION” in silver followed by a small silver bowtie outline. 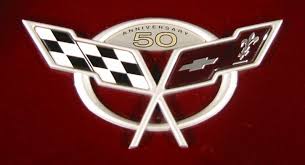 1997 saw the introduction of the C5 Corvette and, of course, a new emblem design. This design returned to a look reminiscent of emblems prior to the C4 body style, though to date the colors have never been returned to their original sides. The red flag was once again red and once again featured the fleur-de-lis (with one line underneath) beside the bowtie. The poles were once again part of the flags and the flags were once again rippled. They were placed on top of a black circle outline. This design was used on both front and rear through 2004, except for in 2003 and for 2004 Commemorative Edition Corvettes.C5s no longer featured the rear emblem on the gas lid. The emblem was still placed in the same area, but the gas lid was moved to the side of the car.
2003 marked the 50th anniversary of the Corvette. This year the same emblem was used, but a silver plate was extended between the tops of the flags and the outline with “ANNIVERSARY 50” engraved in black (“50” was filled with a light gold color).

2004 Commemorative Edition Corvettes commemorated the successes of the C5-R Corvette at the 24 hour Le Mans race in the past years. These emblems also used the 1997-2004 emblem style, but had a solid area between the flags and the top of the outline. This area was black and featured the words “COMMEMORATIVE” at the top and “HEURES DU MANS 2 GTS WINS” at the bottom in white and “24:00” in the middle in red. “24:00” put together with “heures du Mans” means “24 hours of Le Mans” and “2 GTS wins” celebrates the fact that the C5-R Corvette had won the Le Mans twice in the GTS class- once in 2001 and once in 2002, as well as taking other several other top spots from 2000-2003.

The C6 body style was introduced in 2005 and saw yet another new design for the Corvette emblem. This emblem was again the flags, this time with no circle outline. The red flag featured both a brighter and darker shade of red, with the brighter red extending down the pole of the flag. The fleur-de-lis remained beside the bowtie, this time with no horizontal lines underneath, and in gold (as well as the bowtie). A chrome outline accented the flags. This design continues to be used for both front and rear emblems up through this year’s 2009. So you are ready to get that classic Corvette you’ve always dreamed of. You know you want one, you just need to know where to start. You know there are risks involved with any major purchase, and you want to make a smart choice.  RJ wants to help!

Get My Buyers Guide