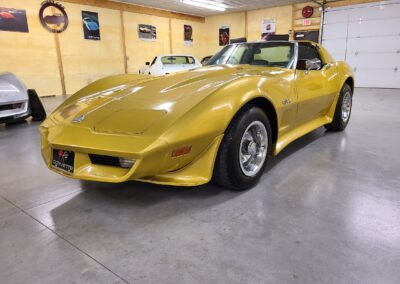 Just what every quiet neighborhood needs. Sure to make you the talk of the neighbors. 350 engine, automatic transmission,  (title is exempt for mileage), black You are currently viewing C3 Corvettes spanning from 1973 to 1977. While you will find some exciting features and changes over these 5 years, some years saw very few changes, though the models still fared well.

The 1973 Corvette received radial tires, interior noise reduction, and most notable was the front bumper redesign, introducing the first “rubber bumper”. The once Chrome front bumper, was now urethane, a change applied to both bumpers in 1974, making 1973 the last year for a chrome bumper on any end.

The 1974 Corvette is easily distinguishable by the rear fascia, as it was made in two pieces and had a notable split down the middle. The 1975 Corvette and those to follow would be one complete piece, eliminating the split.

The 1974 and 1975 Corvette, besides the rear fascia change, were nearly identical. Though, 1975 would be the last year for the convertible option. 1975 saw more changes in regards to efficiency, rather than aesthetics. The 1975 Corvette saw the introduction of the catalytic convertor and more electrical components.

In 1976, popular opinion was that the 1976 Corvette Stingray was one of the best looking Corvettes up to this point in time. The cowl flap was removed and in its place was a new modified cowl induction. The air-extractor vents and astro-ventilation system were removed from the rear deck. 1976 Corvettes also saw the welcomed introduction of aluminum wheels.

The 1977 Corvette was nearly identical to 1976, for good reason, as it was well received. Added new was a luggage and roof panel rack. In place of the Stingray emblems were the Corvette crossed flags insignia. The previously orange engines, were now blue.